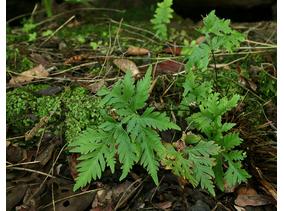 Doryopteris concolor (Langsd. & Fisch.) Kuhn is a fern which belongs to the family Pteridaceae. The word concolor means uniform in colour (Roux, 2003). Its common name is the Hand Fern due to having fronds (large divided leaves) shaped like hands (Arab Times, 2011) and also the Oak Leaf Fern (Lockyer Valley Regional Council, n.d.).

Doryopteris concolor is a perennial herb (Florabase: The Western Australia Flora, 1997), meaning it persists for many growing seasons and lives for more than two years (Simpson, 2010).It lives 6 to 20 years long and is terrestrial. It is a dark green and delicate fern (Cook Islands Biodiversity Database, n.d.) and has evergreen leaves and stems (Nothern Land Manager, n.d.). It is 20-30cm in height and grows in the crevices of rocks, in deep ditches and in dense areas of vines (Florabase: the Western Australia flora, 1997).It is found in tropic and subtropic environments including northern Australia. It has a stipe (leaf stem) that is shiny and dark brown to black in colour (Spencer, 1995).