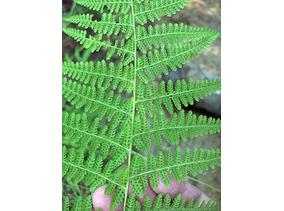 Dennstaedtia, also known as the Hay-scented Fern, has approximately 45 species around the world. One of these species is native to Eastern Australia and has also been sighted in the Jarrah Forest's of Western Australia. It is known as the Hay-scented Fern due to its distinct hay scent, which is especially strong near the end of season, when their fronds are turning a yellow-brown colour. These Ferns live in tropical and temperate regions and are recognised by their deciduous fronds and their cup-like sorus.